MYTH BUSTER #1 : Yoga poses that are being practiced today have been done the same way for thousands of years.

Pain in any form must be anticipated and avoided.

Sanskrit translated from Patanjali’s Yoga Sutras, an oral tradition estimated to be 5000-6000 years old and transcribed to the written word approximately 2400 years ago.

Although yoga philosophy dates back five or six thousand years recent academic research shows that many yoga poses actually originated in the first half of the Twentieth Century, and are more European in origin. The Yoga Pradipika, written in the fifteenth century, showed 32 yoga poses, half of them seated, and did not include sun salutations, inversions, revolved triangle, downward dog or pushups. In the last hundred years, yoga poses as we know them today were created as part of a global movement that combined religion and spirituality with western ideas of Athletic and physical training

The YMCA, Spiritual Calisthenics, and Muscular Christianity were all established in Europe before the turn of the century. With the invention of machines during the industrial revolution an easier lifestyle was created and many people felt that man would fall into moral and physical decay. At the time of the British occupation, organizations such as the YMCA became established in India. The Indian yogis Krishnamacharya and Kuvalayanda, influenced by the western ideas of exercise and athleticism, established the health and fitness regime that dominates the yoga industry today. Yoga, as practiced today, is simply a product of that “physical culture” movement.

Mark Singleton’s book, “Yoga Body, The Origins of Modern Posture Practice,” illustrates that many modern yoga poses were created from a mix of western contortionism, military drills, and women’s gymnastics, combined with ancient yoga philosophy texts such as the Yoga Sutras and the Upanishads. Simply because yogis are shown doing these poses does not mean they are safe nor that they are anatomically correct for the human body. Yoga poses need to be bio-mechanically tested to establish their true value.

MYTH BUSTER #2 : Hard and tight abdominal muscles are necessary for good posture and a healthy back.

One of the biggest blind spots in the yoga and fitness industry is the belief that the “abs should be flat and tight” or that having strong abdominal muscles is a remedy for back problems. Millions of people tighten their abs in order to acquire a beautiful waist or an impressive six-pack void of fat, while others routinely exercise themselves into a muscular vice-grip trying to strengthen their core. While many people erroneously believe that a strong core means having a tight belly, it is actually a toned yet relaxed belly that will keep us flexible, aligned and powerful in the long run.

Back pain is caused not just by weakness, but also by excessive tightness in the anterior trunk muscles; thus over-contracting the abs is not a panacea for back pain, but rather a trigger for it. A tight six-pack in the abdominal muscles not only creates a tense ‘locked long back body’ but also can be dangerous to the health of the spine, nerves, organs and even emotions. Individuals with a six-pack may appear to be athletic and very fit, but could run into back problems as they age.

Common flexion exercises, like abdominal crunches, elbow-to-knee type sit-ups, and straight-leg forward bends continually contract the entire front of the body. This leads to a shortening of the anterior flexor chain and fascia connections that span from the skull to the top of the feet. Tense short abdominal muscles can load pressure on the discs in the spinal column, rotate the pelvis posteriorly, and compress the nerves exiting the spine. Tense abs pull the sternum (breastbone) towards the pubic bone, strain the back, and can inhibit breathing and movement.

MYTHBUSTER #3 : Staff pose is the ‘mother’ of all sitting poses.

Staff pose is one of several yoga poses that require the body to form into a right angle. The human spine is designed with curves to provide shock absorption during movement and this requires a ‘necessary tension’ in the ligaments to keep the vertebrae ‘strung’ together. Positioning the body into a right angle flattens the spinal curves simulating the shape of a chair, the bane of our modern lifestyle. It does not make anatomical sense to exercise or stretch with the body in a right angle position such as staff pose and it is certainly not a functional way to sit.

Even if they feel ‘easy’ for those who are flexible, years of practicing right angle poses can stretch out the necessary tension in the sacral, knee and foot ligaments needed to keep these joints ‘sprung’ as shock absorbing structures. This leads to what I call the Sagging Sacrum Syndrome (SSS). With the lumbar region flattened and the sacrum sagging and flat, the breastbone goes down, the head goes forward, and the weight from the upper body compresses into the hip and knee joints.
Poses need to simulate how our body functions and moves in real life.

What is the sense in performing poses that go against nature’s design, having more to do with linear straight lines than our natural curving shape and bio-tensegrity design?

MYTH BUSTER #4 : Tucking the tailbone is a good technique that can correct lordosis, ‘swayback’. 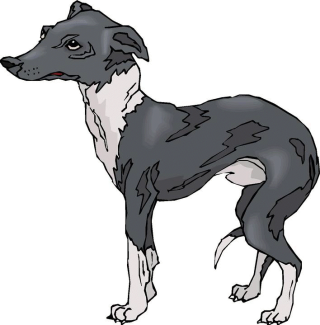 Tail–down posture distorts natural alignment and resembles a dog in fear ‘tucking his tail.’ Many people speak of creating a flat back by tucking the tailbone when standing or by using pressure from the abdominals to push the lower back toward the floor when lying down. To create this action, we enlist our abdominals to shorten and as they contract, they put the spine into forward flexion. Tucking the tailbone pulls the sacrum down, draws the head forward and distorts natural alignment.

What is important when engaging the body is to direct our abs and trunk muscles to stabilize the spine, rather than to flex it. YogAlign® uses a breathing technique to draw the tip of the tailbone towards the pubic bone, requiring no external effort or force from the abdominal muscles.

MYTH BUSTER # 5 : Touching your toes with straight knees will make you flexible. 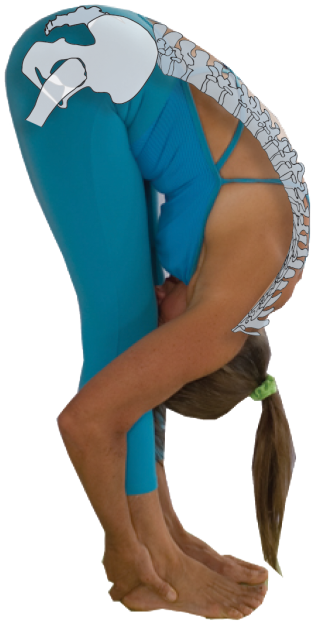 Keeping the knees straight while bending forward is like ‘driving with the brakes on.’ Many hold a belief that toe touching is a yardstick by which to measure ‘flexibility’ and that stretching with straight knees will loosen their tight hamstrings. Stretching isolated body parts like the hamstrings will not contribute to the balanced and ‘global’ nature of our human body, which is designed for movement. Many people who take YogAlign are surprised to find out that their supposed ‘shortened’ hamstrings are part of an extensor chain along the back body this is locked out ‘long’, strained and tense.

Just watch a toddler bend over to pick up a beach toy and you will see how we are innately designed to move. Babies are excellent teachers, as they have not yet been stuffed in chairs and developed the dysfunctional posture habits that plague modern society.

MYTH BUSTER # 6 : Good posture means having a straight spine and a flat back. 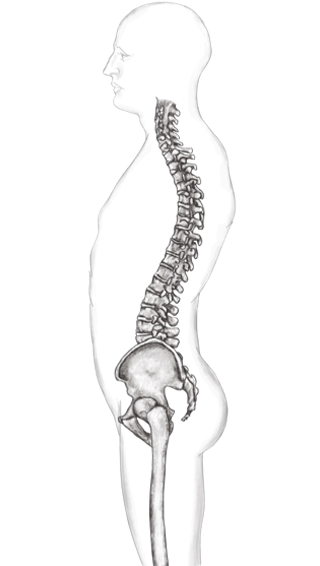 The spine is not designed to be flat; it is designed to have curves. These curves give our spine its strength, fluidity and act as shock absorbers. An aligned spine and strong breathing muscles serve as a warranty against injury and lead to posture that is functional and fluid. Whether you are standing, sitting or reclining, poses that straighten the spine or flatten the back reverse the spine’s natural curves and jeopardize the longevity and vitality of the body’s structure.

Functional posture is dependent upon a spine that is in natural alignment and a body that is rooted in ease. In YogAlign®, natural posture and dynamic movement principles are utilized in every pose. Breathing practices that use the internal muscular forces of extension align our spine into optimal posture.

There are no straight lines in nature. Trying to flatten the back removes the inward curve of lumbar/sacral region. Over time, these body positions loosen ligaments allowing the sacral platform to flatten or tip backwards disappearing the natural 30-degree nutation angle needed for shock absorption during movement. After a period of years, many yoga practitioners begin to feel SI joint and low back pain. For some, this undermining of the main support system in the body- the curves of the spine – can compress and damage the hip joint and/or lead to the need for hip replacement.

MYTH BUSTER # 7 : There is a belief that the main reasons for yoga injuries are inexperienced teachers or improper execution of the poses.

It is true that there is a lack of knowledgeable yoga teachers and some do use forceful adjustments that have hurt students. Also there are the claims that people are not ‘doing the poses right.’ The yoga survey being conducted from this website as well as other research is beginning to reveal that a majority of injuries have more to do with the poses themselves being the ‘culprit’ for these increasing injuries.
In reality there is no way to teach or execute them ‘properly.’ Many of this so-called ‘traditional’ yoga poses stretch the body into positions that are biomechanically opposite to the natural joint functions and design of the human body. Yoga poses should mimic how we actually move and use our body in real life.
MYTH BUSTER #8 : Headstands bring more blood to the brain and decompress the spine. 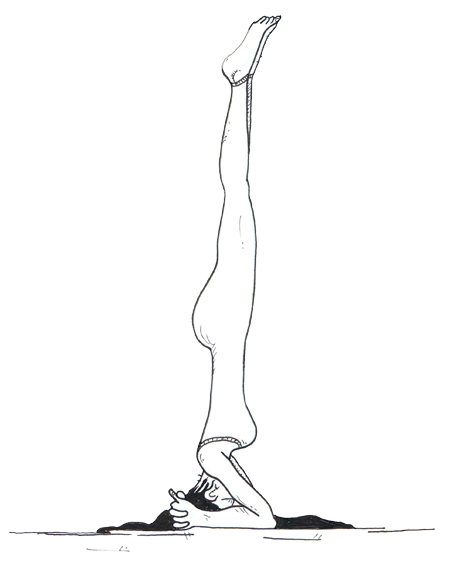 The dangers of headstands, including compression of the vertebral artery and nerve roots, make this a pose that should be eliminated from any safe yoga practice. The brain is a sensitive organ that requires a specific amount of blood and standing on your head will not change this amount. There is a blood brain barrier that prevents excessive blood flow to the brain in order to prevent vessels from exploding (stroke).

Standing on your head does not decompress the spine but instead compresses it in an inverted position. The delicate vertebral structure of the cervical spine (neck) is designed to carry only the weight of the head (5 -11 pounds), not the weight of the entire body.

Yoga teacher Patricia Sullivan wrote an account of the neck damage she suffered from her long-time practice of headstands. Her article, which was
published in the November 2010 issue of Yoga Journal, talks about the nerve damage she incurred by practicing “headstand” for 10 minutes a day, while ignoring all of the pain signals from her body cautioning her that the pose was not beneficial. Finally Patricia had a doctor examine her and they found “extensive damage including a reversed cervical curve, disk degeneration, and bony deposits that were partially blocking nerve outlets.” By her own admission, “my longing to excel both in my asana practice and as an asana teacher had led me to ignore my body’s signals and cries for relief.”